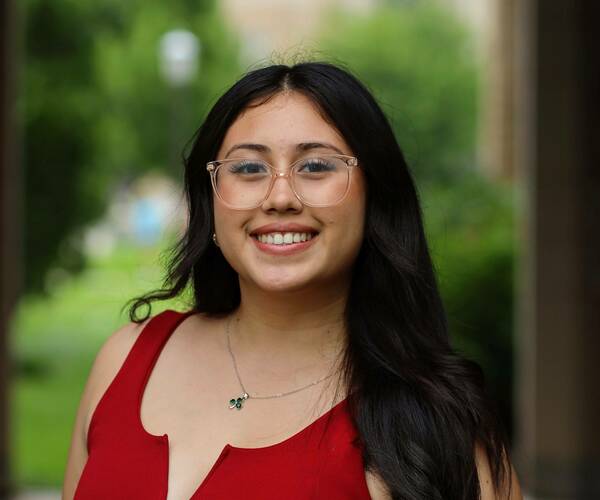 Lizbeth Cordova Lopez is a Biology major in the College of Science. She is an AnBryce Scholar, Galvin Scholar, and a member of the Building Bridges Mentoring Program.

Lizbeth hopes that her biology major and focus on the pre-med track will allow her to pursue a career in medicine centered on helping underserved communities with an emphasis on activism for better healthcare plans and women's health. Coming from a low income, majority Latino community, Lizbeth found that there weren't as many medication options offered and she would like to change that. With a biology major she would like to pursue research in creating homeopathic and natural remedies for pains. As she got older, Lizbeth realized that equal healthcare is not offered in every community. In joining the Pre-Med Summer Scholars Program at UCLA, Lizbeth was able to learn about different specialties in the medical field. She met Dr.Aparna Sridhar, a clinical professor of obstetric and gynecology who introduced her to the obstetrics specialty which is the one she ultimately hopes to pursue. Her goal is to open her own clinic in the San Fernando Valley where she grew up, so that she may give back to her community. In addition, she would like to start her own scholarship board to give students the opportunity to pursue their dreams of higher education.

During high school she was very active, she did cross country, varsity swim, and participated in a club called Students Run Los Angeles. That being said she has completed six Los Angeles marathons and hopes to complete another in the coming year. She participated in the school's Folklorico club, Leadership Club, and Yearbook committee. Not only did she participate but she was an instrumental part of the Yearbook committee as she took on the role of  Editor-In-Chief.  She was also the lead college peer counselor where she led presentations, created workshops to help her peers with UC application, common application, and FAFSA. She was the Captain in a program called the Los Angeles Police Department Cadet program where she helped her community by doing outreach and community service hours. She helped lead community toy drives and food drives with her youth service officers. And lastly, she was a teen influencer who created videos and presentations on health and wellness for a non-profit organization called Mothers Against Drunk Driving.

In addition to her interest in biology and research for the pre med track Lizbeth hopes to engage in clubs at Notre Dame that fit her academic and personal values. Lizbeth has joined the Building Bridges mentoring program and hopes to be a part of the Latin Student organization this coming year. Moreover she would like to join a couple intramural sports teams like basketball, volleyball, and swim where she can maintain her mental health in balance. In conclusion she is looking forward to finding a club, a Notre Dame which advocates for women's health and goes out into the world to help underserved populations.

To follow along with Lizbeth's journey connect via LinkedIn here