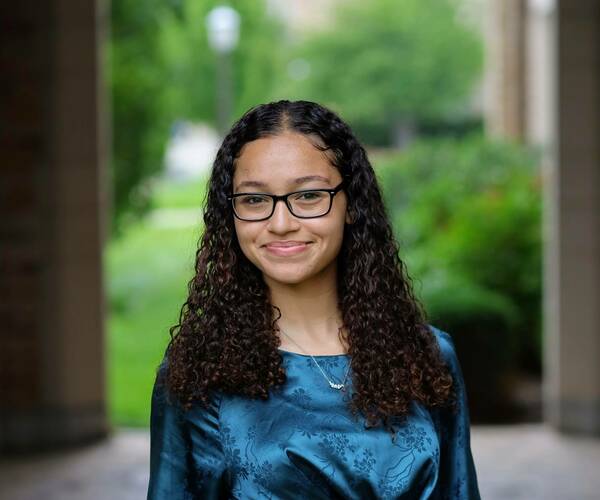 Sonia A. Lumley is a political science major with a potential complementary major in Global Affairs. She is an AnBryce Scholar, Questbridge Scholar and a part of the 2026 cohort for the Building Bridges Mentoring Program. Sonia would like to be on a pre-law track, with a concentration in immigration law. She would like to explore Central America and the individuals who plan to migrate to the United States in the near future.

During her time at Notre Dame she would like to explore every possible opportunity and take total advantage of it. Being in a town of unrepresented youth and few opportunities to thrive, she would like to create opportunities all across the country for students that were like her adolescent self while at and after graduating from Notre Dame. She is extremely excited to explore the possibility of being an intern while studying in Washington D.C. because it goes right along with her passions for immigration advocacy and American studies.

While attending Golden Valley High School she was involved in several clubs and organizations. She was the California Scholastic Federation President as well as the Black Student Union and Empowerment Club Secretary. She also served as a Young-Life Leader for her entire school, and was the Pre-Law club Co-Founder/Vice President. She was a part of the undefeated GVHS Cardinal Regime and served as section leader for 16 flutes during the marching season and 15 flutes during the concert season. She was also a part of the Band Council and served as Public Relations Officer. She played four sports; volleyball, cross country, basketball, and track while being in the athletics captains club . She served as a captain for basketball and track and was on varsity all four years for both sports. She also was on the Academic Decathlon team for her school and placed consistently in the Merced County of Education tournament. She also held a remote internship at TurnUp a youth activism organization as a Social Media Manager.

Sonia would like to make impacts in several lives and spaces. She believes Notre Dame will unequivocally equip her for a bright future that will shine a light in other lives to help the greater good.