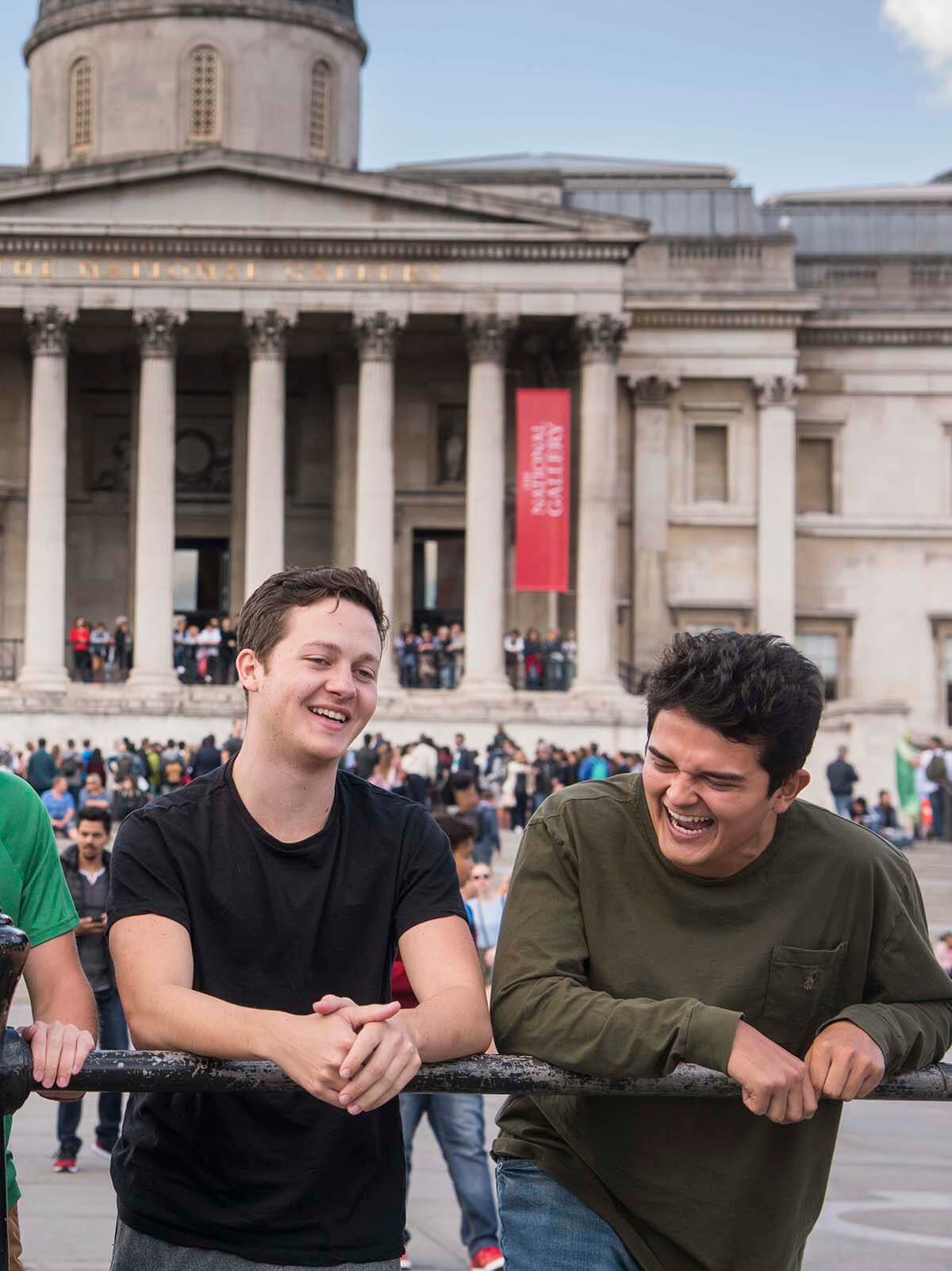 Sanchez in Trafalgar Square with a classmate

Armando Sanchez participated in the London Undergraduate Program and the London Internship Program this semester. Sanchez is an AnBryce Scholar and is grateful for the opportunities education has afforded him. He writes about his time in London, how it gave him a more global perspective, and how his internship allowed him to inspire future generations to pursue education.

Education has always served as an escape for me. The classroom was the place where I knew I was in control. In my youth, I didn’t know where education would take me, but I knew college was my answer and I was going to do whatever it took to reach that goal.

With hard work and the help of supportive educators, I was blessed enough to become a student at the University of Notre Dame. When I first stepped on campus, I was not aware Notre Dame had a study abroad program, or that international programs even existed. I had just moved 2,000 miles from California and the last thing on my mind was traveling any further.

I left the country for the first time the spring semester of my first year. I visited London through a study abroad immersion experience provided by my scholarship program, AnBryce. As many say, my first international experience gave me the travel bug. Before I knew it, I was headed back ‘across the pond’ for a semester abroad in London.

My experience abroad fortified my understanding of the importance of education. I would not have been able to study and live in an international city if it were not for pursuing a post-secondary degree. It would not have been possible without Notre Dame.

Experiential learning in London transformed my concepts of the world. I remember reading about the Roman and British empires throughout the early years of my education. However, being in the heart of the history allowed me to connect with the content in ways that transcended the text and gave me a memory connected to those tales.

Courses like Shakespeare in London and Politics of Protest allowed me to immerse myself in British culture. In Shakespeare in London, we discussed the genius of Shakespeare and saw how his plays are produced 400 years later in venues like Shakespeare’s Globe and all over the West End. In Politics of Protest, we learned about radical thinkers and ideas which have influenced the world and took a short walk to the house of parliament after discussing the Monarchy and Democracy. We even examined the current effects of Brexit on the British as a state and a people.

Beyond the classroom, Notre Dame offered excursions to different parts of England. Particularly, the Stonehenge and bath trip afforded the opportunity to see the architectural prowess of both the early man and the Roman Empire. Moments like these encouraged me to reflect and appreciate the fact that we are in our own era and are constructing a narrative to be studied and looked at in awe in future years. It also allowed me to contextualize and connect with the legends of the past. In the Roman baths, I recall stepping through the maze of tunnels and irrigation and touching the thousands-years-old foundation of the spa—I closed my eyes and I was there.

I also had the unique opportunity to participate in an internship at Blessed Hugh Faringdon Catholic School in Reading as a leadership intern. As an intern, I examined the framework of the education system in the UK. The position allowed me a unique perspective on British culture beyond the textbooks and field trips; I was able to ask the students and staff questions and have an experience beyond the Notre Dame London bubble. Through research and engaging with students, I was even able to contribute to the school by offering new methods of encouraging and supporting high-achieving low means students on their journey to university. I also grasped the experience of being a working Londoner, embarking on an hour journey to work, both ways. 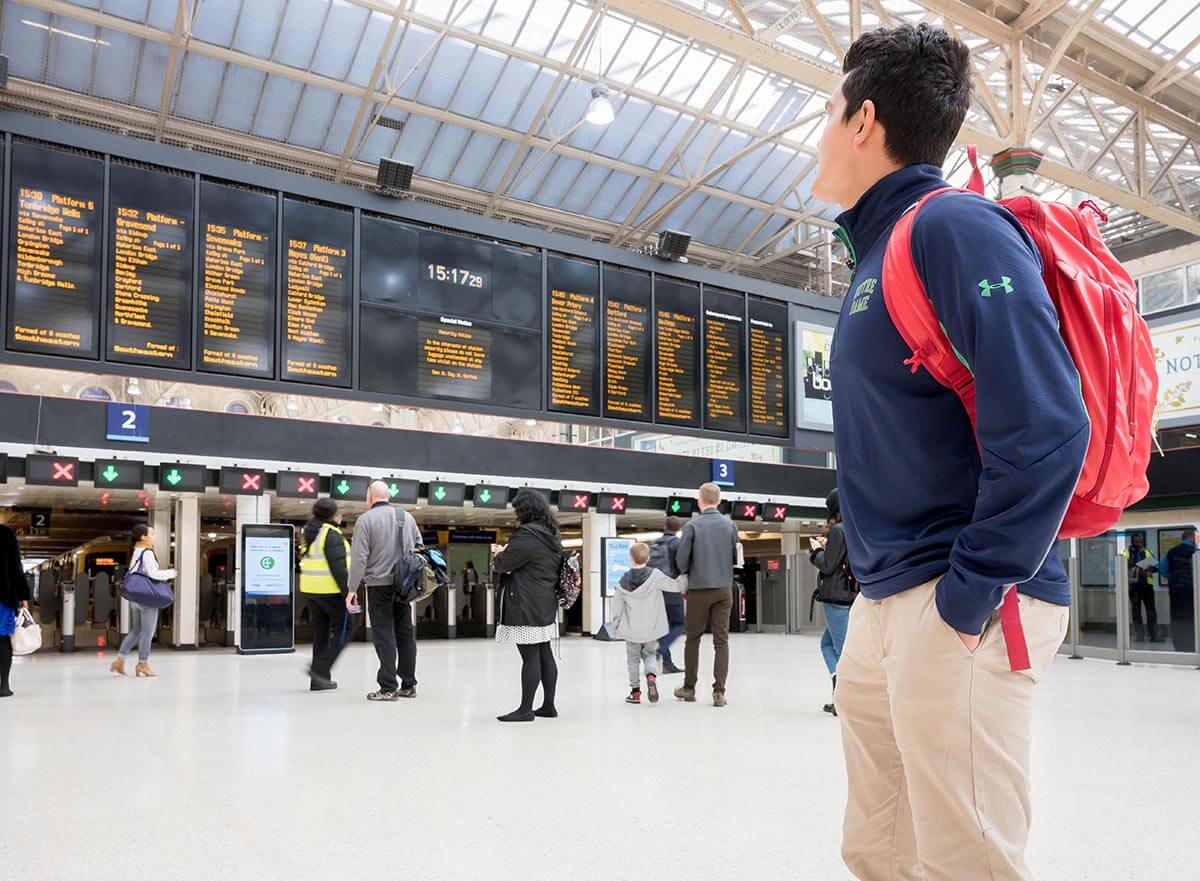 Sanchez travelling to his internship from Waterloo Station

Upon arrival to the states, I plan on sharing my experiences with young students and encouraging them to chase their dreams and allow education to expand their horizons.

Being a student at Notre Dame has been a life changing experience in and of itself. However, my semester abroad provided me the unique opportunity to live in a foreign country and practice being a global force for good.

Originally published by Joanna Byrne at london.nd.edu on December 19, 2018.