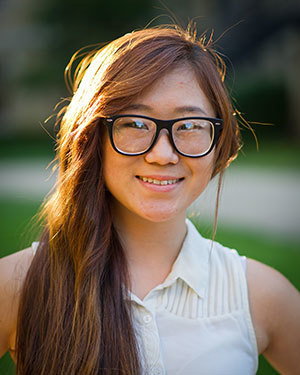 In the summer of 2015, Christina Jeong ’17, a Japanese and Film double major, traveled abroad to Seoul, Korea, to study at Yonsei University’s International Summer School program. For Christina, the trip was an opportunity to return to the country of her birth and reconnect with her family, whom she hadn’t seen since she was a child.

“I think my academic growth came second to my growth as an individual and what I learned about my own identity,” Christina says. “I found more pieces to who I am as a person. By the time I returned from Korea, I felt as though I came back a more complete person.”

According to Christina, she’s found a second family in the AnBryce Scholars community. “Every dinner that we have—whether it’s a fancy catered networking event or a South Dining Hall dinner—has helped me in one way or another. These little experiences I have with AnBryce always remind me that I’m not alone, and that I have family here at Notre Dame that values me.”

Christina feels a deep sense of gratitude for the experiences she’s had through AnBryce—and she plans to pay it forward. “We all will hopefully return to Notre Dame one day and give back to the community that invested so much in us,” Christina says. “A large part of what drives and motivates me is knowing that somebody out there who doesn’t even know me believed in me enough that they were willing to pay for my education and invest in my future. Isn’t that something?”