Central to the AnBryce Scholars Initiative is immersion experiences supporting and expanding the work of becoming a global citizen.  Students take part in immersive travel experiences domestically and internationally. Currently, our first year scholars travel Ireland, with the support of campus partnerships from our University Writing Program and the Nanovic Institute for European Studies, though, it has also meant a trip to Washington, D.C. on occasions where students are unable to travel abroad for any reason or elect to stay Stateside.

We chose Ireland as the site of our current Global Immersion Program in order to show the juxtaposition of rural west of Kylemore and the urban east of Dublin. Our time in Kylemore has strengthened bonds between cohorts and Dublin has shown a city rich with history transitioning into the technological age.

Reflections from our scholars 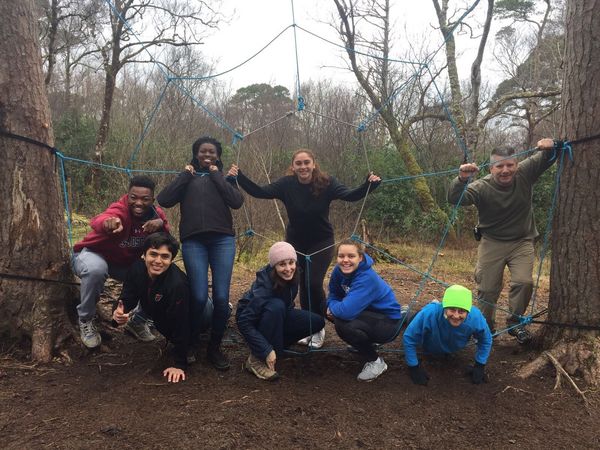 Traveling to Ireland over spring break was a life changing experience for me and the other members of my cohort. Not only did the trip transform the our relationships from that of simply peers to being close friends, but it allowed for me to develop culturally and grow as a person. My mountaintop moment came while literally hiking up a mountain in Kylemore. I'm from Philadelphia, PA, where the grass is scarce and the buildings are plentiful; in fact, there is exactly one tree on my home's street. That trip up the mountain taught me to appreciate the little things in life that I often times took for granted - from a shamrock in a field of grass to a displaced rock on the side of the hill, beauty can be found in all things. Shamar Cousin '22

I had the pleasure of meeting Kevin Whelan, the director of the Keough-Naughton Notre Dame Center in Dublin, as he gave a lecture on Daniel O’Connell and his connection to Frederick Douglass. Mr. Whelan informed us about the history of Ireland and its struggles regarding its relationship with Great Britain and prejudices against Catholics during the 1800’s. I never knew that Great Britain ever had Ireland under colonial rule because in my previous history classes, we only learned about their colonization of places like the Americas, Africa, and India. Never had it occurred to me that a nation of predominantly white people would be overtaken in colonization and discriminated against by another white nation. I learned that Daniel O’Connell was a man who not only fought for the rights of his fellow Catholics, but for the rights of all humans, whatever variances they may have. He inspired Frederick Douglass and had such an impact on him that Douglass began to refer to himself as the “Black O’Connell”. Douglass inspires me, and to learn about one man who inspired him was a fascinating experience. Through this interaction with Kevin Whelan, I felt that I was able to understand Ireland and its people which then allowed me to better understand the place of the United States and myself within a global context. Teayanna Leytham '22

The global immersion program truly fostered my understanding of diversity and human relations, both within my cohort and through observing the people around me in Ireland. I came to realize the sheer number of people I have yet to meet and was reminded of the reason I strive to make the world a better place through obtaining an education. I also had the pleasure of getting to know each member of my cohort very well, finding similarities between us and differing perspectives that built upon my own. Overall, the global immersion program reminded me that I am only one small piece of a big picture generation that will improve the world, beginning with my cohort an extending internationally. Christina Dulal '22

Coming from a big city, I am not well versed in the ways of nature. Hiking, swimming in creeks, and fishing are not activities I normally engaged in growing up. Apprehension consumed me as our group walked towards the base of the mountain. Archeologist Michael Gibbons expertly led us up the mountain and instructed us on the proper ways to climb. A second did not go by without him yelling, “Hands out of pockets!” or “Zig-Zag!” By the time we were climbing down, the entire AnBryce cohort found ourselves yelling, “Don’t forget to zig-zag,” and “Hey, keep those hands out of those pockets!” Instead of just pointing out various artifacts and landmarks, Gibbons would pick random people out of the group to illustrate the history. When the hike first started, Gibbons pulled me aside and told me to go stand in this random pile of rocks a few meters away. After I did, he proceeded to yell at me that I was standing in a 5,700 year old tomb! I never thought I would ever be able to physically touch an artifact that old let alone stand in it! Ireland’s history felt more real because Gibbons beautifully put me in the history and I know I will never forget that moment. Who knew a rising Black woman could feel so connected to a place like rural Ireland? Tia Wilson '22 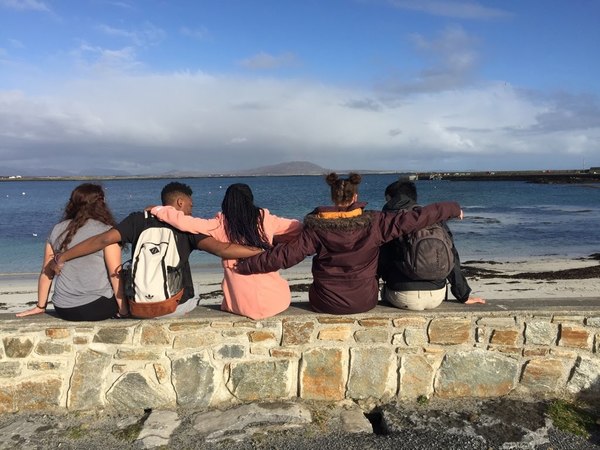 Upon returning to campus from Dublin, I leaned to Shamar and told him, “not much has changed at ND in the past week, but we return changed men.” Being in the new and previously unfamiliar country made me think more about who I am, where I come from, and what I can learn from new environments. Nearly every part of the trip was a lesson, from learning Irish history over thousands of years to learning how Ireland views immigration and refugees positively. From hiking picturesque mountains with history lessons from archeologist Michael Gibbons to having political conversations with the locals at restaurants and pubs, interacting with the Irish and Notre Dame family in Ireland opened me up to various new perspectives. Thus, it is not a surprise that the part of the trip that struck me the most was volunteering at a very diverse inner-city school in Dublin. I learned a lot from the 7th grade class we taught where nearly every student was of a different nationality. We were also able to give them a taste of the America we know with our About US presentation, and I am glad that our AnByrce cohort left a positive example of America on the kids. I didn’t know Dublin before the trip, and in meeting Ireland I have met a new inspired side of myself.   Raphael Banuelos '22

Our Washington, DC program serves as an immersive experience for students who elect not to travel abroad. Extensive planning and help from the AnBryce Foundation creates a wonderful experience providing our students with a domestically based cosmopolitan experience.

Students take a personalized tour of the Capitol and Supreme Court, attend lectures at Georgetown University or the University of Virginia, and learn about the gentrification of predominantly African American U Street. They also visit the AnBryce Foundation headquarters in McLean, VA and Camp Dogwood, a summer camp run by the AnBryce Foundation.  In 2018, the students visited Monticello, the National Museum of African American History and Culture, as well as the Smithsonian Art Museum. 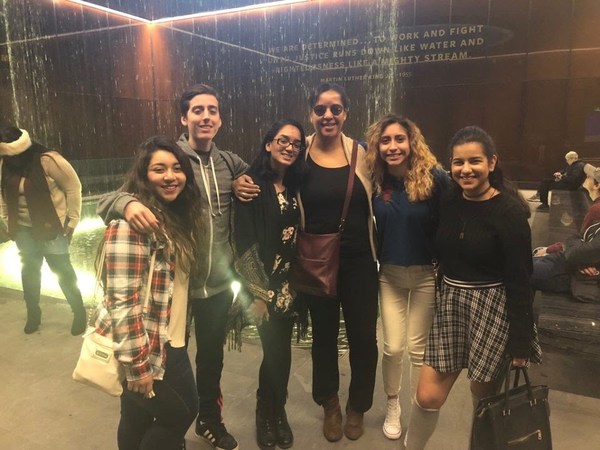 As a global city, we hope that DC would provide interesting points of contrast to European counterparts, as well as serve as a fascinating experience in its own right. Given DC's deep history, wonderful monuments and architecture, and socioeconomic disparities, DC provided a really important experience in the ways that global cities function"
- Founding Director, Dr. Paulette Curtis

Reflections from our scholars

What made the Global Immersion Program a useful experience to me was that it allowed me to better understand the culture of our Capitol. I am from New York City, and so I am used to living in a large city. However, Washington DC has several differences from New York City. As a whole, the city is much cleaner; the Metro runs smoothly and does not smell, and there is less litter than in New York City. In addition, I was able to get an inside look at how our government is run: I visited the personal office of Justice Thomas, and was able to see the House of Representatives in session. Although I know how the branches of our government work, being able to see them in action in front of my eyes helped me more accurately see how the government operates on a day to day basis. Eamon Lopez '22

I never would have imagined I would be spending a spring break in Washington D.C. Growing up, there were a few opportunities that were offered to me to go to D.C. but I could never take them for one reason or another. So when I first saw the Capitol from the plane, it felt surreal. I was very nervous but also very excited. In my mind, I was excited to see the city as a global city. I was hoping to see people of various ethnicities and races, and hear a variety of language. And in some part I did. Since almost everyone that went on the D.C. trip spoke or understood Spanish, I found myself speaking my native tongue more often than I probably did in my whole time at Notre Dame. Because I was in a more diverse city, I felt more free to dance with the language which my heart had been craving for a long time. It was as if I didn’t feel a pressure to only speak English, anymore—a pressure I didn’t even know was there until then. Even though I was nowhere close to home, and there were not a lot of Mexicans in the Washington D.C., I felt safe to be myself. That’s when I realized how closed off a person can be sometimes, and unless they step out, they will always remain that way. Odalis Gonzalez '22

Everybody hears and knows about slavery and how even our founding fathers, Jefferson in particular, owned slaves but what we are taught in schools only scratches the surface. I, and my other fellow D.C. companions, had the opportunity to go on a tour of the National Museum of African American History and Culture and I left there knowing and understanding more about slavery in the nation that I otherwise would not have learned. Our tour guide, Ms. Fayne, did an excellent job of lecturing us and taking us through the museum (which is set in chronological order) in order for us to attempt to grasp what it could have been like. The stories she told us: slavery in Africa, the riots, the harsh treatment, Ashley’s Bag, etc. all made me squirm and I admit, there were tears. Tears because it’s astonishing to believe people had to go through that and society just stood by and believed it was okay. Moreover, however, I think it really resonated with me because you’re put in a place where you’re forced to see artifacts and displays that only further prove the atrocities that occurred. These aren’t just stories it’s real life and people had to go through it. It was really an eye-opening experience and it only further allowed me to reflect on my life now and the lives of African Americans in the United States, then and now. Isel Otero Torres '22

London was the site of three Global Immersion trips in 2015, 2016 and 2017. Our focus in London, like all of our trips, was on globalization and being a global citizen. Students also saw, firsthand, the effects of Brexit and how different news is in various parts of the world.